The Sorceress: The Secrets of the Immortal Nicholas Flamel

Flamel takes the twins to London, where he uses Francis to enlist Palamedes, the Saracen Knight, to help them. Palamedes takes them to his home, a junk-yard in London, and they manage to work together to contact Perenelle. Perenelle is trapped on Alcatraz with the friendly but untrustworthy spider elder, Areop-Enap, after narrowly escaping the Sphinx and defeating the Morrigan. Morrigan had been suppressed sufficiently by the Words of Power that resided on the island that her body was retaken by her two elder sisters, Macha and Badb. Perenelle also makes fleeting contact with Scathach and Joan of Arc by scrying. Areop-Enap and its spider army are then attacked by an onslaught of poisoned flies, killing most of the spiders and wounding Areop-Enap. Billy the Kid has joined forces with Machiavelli in an attempt to kill the sorceress, but Perenelle, aided by Macha and Badb, tricks the pair and steals their boat, travelling back to the mainland with her new ally, the Crow Goddess.

END_OF_DOCUMENT_TOKEN_TO_BE_REPLACED 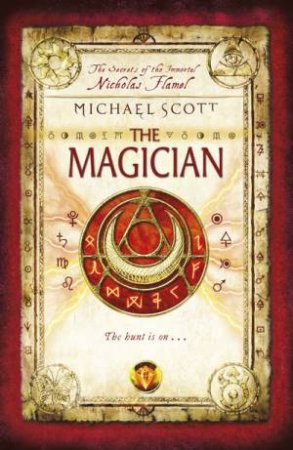 Sophie and Josh Newman – 15 year-old twins – are in Paris with the alchemyst, Nicholas Flamel, and his friend, Scathach. They now face Niccolò Machiavelli and his colleague, but also rival, John Dee, who both work for the Dark Elders. Machiavelli is plotting to capture the twins and Flamel with the missing pages of the Codex – or Book of Abraham the Mage – before Dee can arrive in France from San Francisco. The twins seek out a friend and student to Nicholas, Comte de Saint-Germain, who teaches Sophie to use the elemental magic of Fire. Saint-Germain’s wife, Joan of Arc, helps Sophie to learn to control her aura and to sort out the Witch of Endor’s memories from her own. Josh is given the legendary stone sword Clarent, twin blade of Excalibur, by Nicholas. Clarent is an ancient Fire Elemental sword. Josh, Joan, and Scathach encounter three Disir, more commonly referred to as Valkyries. The Disir are ancient enemies of Scathach and bring along the soul-devouring Nidhogg, a ferocious monster once trapped in the roots of Yggdrasil – the world tree. The monster was freed after Dee destroyed Yggdrasil and attacks Scathach but fails to slay her. Instead, it captures Scathach in its claws, but flees with Scathach when the ancient sword Clarent, wielded by Josh, wounds it. Meanwhile, Nicholas’ wife, Perenelle Flamel, who had been captured, is taken to Alcatraz as a prisoner.