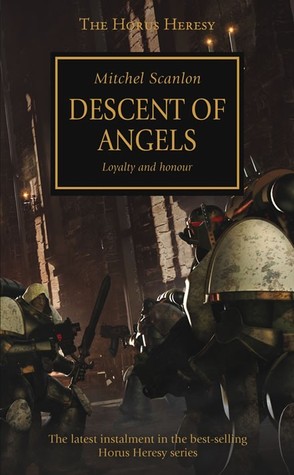 Zahariel El’Zurias, a boy native to Caliban, is inducted into the Order, an organisation of knights dedicated to defending the people of Caliban from its many predatory beasts. His induction takes the form of mock interrogation where he is questioned by three of the Order’s leaders: Lion El’Jonson, Luther and Cypher. He passes the induction and trains as a knight-supplicant alongside his best friend and cousin Nemiel, with whom he shares a competitive rivalry. While the boys train, the knights of the Order continue to carry out Jonson’s grand plan to hunt Caliban’s Great Beasts to extinction, though the Lion reveals to Zahariel during an minor initiation that the hunt is almost at an end with the near-impenetrable Northwilds the only remaining stronghold of the beasts. During a scouting mission led by Zahariel’s hero Amadis, Zahariel’s squad comes under attack by a Great Beast and takes casualties. Zahariel risks his own life to keep the beast distracted from his friends, and while Amadis kills the beast he ensures that Zahariel is recognised for his actions, earning him attention from the Order’s upper echelons. Amadis begins mentoring Zahariel and Nemiel’s jealousy makes their rivalry less friendly than before, though they remain close.

The knights of the Order host a delegation from the Knights of Lupus, a knightly order from the Northwilds who oppose Jonson’s plan and have killed scouts sent into their territory. Their leader, Lord Sartana, refuses to back down and Jonson declares war on the Knights of Lupus. During the confrontation it is revealed that Amadis’s birth town of Endriago is being preyed upon by a Great Beast and Amadis declares a quest to destroy it. He returns to Aldurukh mortally wounded and gives Zahariel his pistol, revealing that the Beast of Endriago is a rare and deadly Calibanite Lion before dying of his wounds. Grief-stricken, Zahariel declares a quest against the beast. His friends give him a farewell feast, convinced he will not survive, and Zahariel travels to the Northwilds where he wanders into an area of diseased woodland and becomes aware of a malign presence deep beneath the earth. There he encounters the Watchers in the Dark, who reveal that the same taint is within Zahariel and is responsible for the Great Beasts’ evil, debating whether or not to kill him until he swears to oppose the malign force as they do. They send him on his way, warning him to stay out of the area is it corrupts those within it. Ambushed by the Beast of Endriago, Zahariel is overpowered and near death until his desperation unlocks his latent psyker powers, allowing him to see through the beast’s skin and place his pistol directly against its heart. He pulls the trigger, slaying the beast, and takes its head back to Aldurukh as a trophy. He is raised to knighthood in honour of his achievement, and it is revealed that Lion El’Jonson will soon be raised to Grand Master of the Order. Nemiel has also been raised to knighthood in the intervening time, and soon after the elderly Lord Cypher goes on his final quest. A new Cypher is chosen from the ranks, his identity a mystery as per tradition.